We recently asked our social media followers if they thought second hand smoke applied to humans, as well as pets. Survey says…yes! Some of the responses were “for sure” and “100 percent”. The original question came to us as we were driving by a beautiful farm in the early morning hours. The sun was shining and the grass was a bright green. It was a beautiful morning. Then we saw a horse being brushed out by its owner, which we thought, “ah, how serene.” But then, we saw a cloud of smoke surround the horse’s head and we realized the owner was smoking a cigarette as she was brushing out the horse. 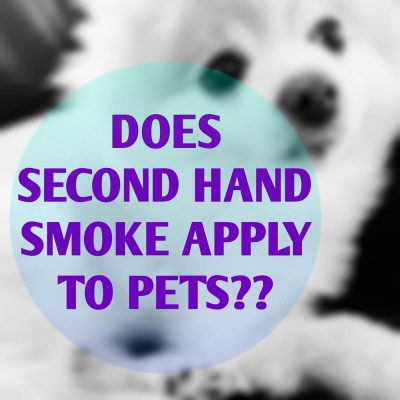 We aren’t fans of cigarette smoking to begin with, but as soon as we saw that smoke, all the happy thoughts of the beautiful morning escaped us. All we could think about was the horse and what could have been going through his/her mind – or what was going into his/her lungs!

Pets can get cancer just like humans can. We’re sure you have heard of a pet having cancer or had direct experience with a pet having cancer. We can’t change the action of others but let’s all be mindful of the pets in our lives. They are living, breathing beings. They should be treated with the same respect as any family member in your household – because pets are family too!

Gifts That Dogs Give Us

Does your dog give you gifts? Well, a recent photo of Oprah's dogs got us thinking... It was Oprah's birthday and... read more

DogLoverStore is Now on Amazon.com

Amazon is a marketplace known for their enormous offering of products and services. Available products range from electronics, to e-books,... read more

First Aid & Safety Checklist Essentials When Camping with your Dog

Last week we covered all the food and water essentials you should have when you are camping with your dog.... read more

Ever since we started our website, we have had many requests for custom options. Features like customized lettering for our... read more

New Year Checklist For You and Your Dog

Every new year is a chance at a fresh start. As humans, we talk about things to work on, making... read more

What We are Loving this Autumn

Each season we are going to start bringing you the top three items we are currently loving. Some of them... read more

One of our favorite pups just celebrated his birthday! Sir Ferguson is the most loving, playful, intelligent miniature Labradoodle we've... read more

It's officially Fall and that means pumpkin is in the forefront of everyone's mind! Pumpkin lattes, pumpkin muffins..heck! Now they... read more

New Member of the Family – Meet Oliver the Goldendoodle!

Any new pup that comes into our extended family here at DogLoverStore.com is a blessing! So, we would like you... read more