Safety of Dogs When Traveling Unsecured in Cars & Truck Beds

Safety of Dogs When Traveling Unsecured in Cars & Truck Beds

We recently took a road trip down to New Orleans, Louisiana. We live in Massachusetts, so that’s a pretty long drive; about 24 hours give or take. During these hours on the road we saw something that we find to be not so common in New England; dogs riding in the back of truck beds, even on the highway! It wasn’t just a onetime thing we saw in Georgia or on a back road in North Carolina. We saw this in almost every southern state that we crossed into from Massachusetts down to Louisiana and back; North Carolina, Tennessee, Alabama, West Virginia, Virginia, Kentucky, and Georgia. Once we got back up to the Northern states we found it much less common; Maryland, New Jersey, New York, Connecticut, Rhode Island, and Massachusetts. We aren’t saying that we are against this or anything, but the unfamiliarity of something that seems so common in other states got us thinking. 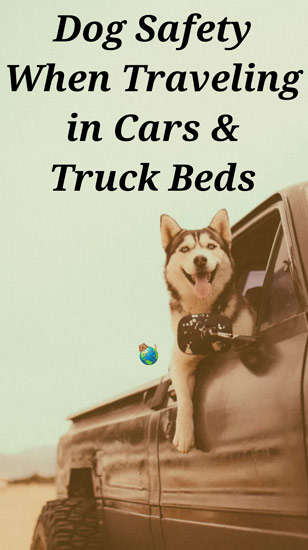 The majority of dogs out there are smart enough to know not to jump out of a moving vehicle, let alone a fast-moving truck on a busy highway at night. But, these dogs are not granted the security that their owners and driver inside the truck does. Unfortunately, if there happened to be an accident, the people inside the vehicle would most likely be fine, especially if they are wearing a seat belt, but the dog sitting loose in the back of the truck would most likely not go uninjured or perhaps even survive. It’s funny when we see a dog sitting loose in a truck bed and then we see a I Love my Dog bumper sticker. I think such a love deserves a little bit of protection, don’t you think?

A statistic once stated that approximately 100,000 dogs are killed annually by accidentally falling out of a truck bed, getting projected due to an automobile accident or slipping out the back of the bed if the door falls ajar. A car doesn’t even have to get into an accident for the dog to be flown from the truck; a hard pothole in the road may be enough for them to fall out. In this case, the owner may not even know the dog is no longer in the truck and this could lead to the dog becoming lost and alone if he can’t find his way home. A dog falling out of the back of a truck can distract or even cause accidents for other drivers. For this reason, many states, such as California, Connecticut, Oregon, Massachusetts, and New Hampshire, have taken notice and created laws against dogs riding in the back of trucks. After doing a little bit of research, we have realized why it is so uncommon for us to see dogs riding in the back of trucks in New England, and that’s because most of our area has already started to take a stand against it. Most state laws make sure the dog is not riding out of confinement, which is more likely to cause human injury in the case of worsening a car accident. Certain cities, including Indianapolis and Seattle, have taken charge separate from their state to further protect the dog inside the vehicle. Seattle’s law states:

“Any person who willfully transports or confines or causes to be transported or confined any domestic animal or animals in a manner, posture or confinement that will jeopardize the safety of the animal or the public shall be guilty of a misdemeanor.”

As with a human, if a dog is inside of a car without being secured by a harness, he or she can sustain substantial injuries or even death during a car accident. Animal officers as well as police officers have begun to take notice and animal activists consider this animal cruelty. If a dog does not have a “seat belt” on or something similar, they are being put at risk of harm. Vehicle occupants are required by law to wear seat belts in almost all 50 states. Some states only require front seat occupants to wear a seat belt, while other states require all occupants to wear a seat belt. All children are required to wear seat belts in the United States. Dogs are as alive as people so they deserve equal attention for their wellbeing.

If you want your dog to travel safely with you then buckle them up! It’s so easy to do, especially with all the varieties of harnesses available. Every color under the sun is out there and multiple sizes are available – from a teeny tiny XXS for a teacup pup to a super XXXL for a dog like a Great Dane (could they even fit inside of car? Hm…). Pet booster seats are also available, which act as both a seat belt and give your dog a better view out the window. If you don’t want to spend money on a harness you can easily rig up a security belt by attaching a dog leash to your dog’s collar in the car.

Securing your dog makes sense for everyone, you, your dog, others who are in the car with you, and those who are driving on the road next to you. For a little extra added protection, check out our guardian angel dog ornaments which many of our customers use as a blessing for them, their dogs, and their car on the road.