We know after a long day of work you just want to sit down with your favorite snack and start munching away. Your dog may come wagging over with excitement because if he is like most dogs, he gets to snack on what you are eating too! Is it bad to feed your dog table food? Well, it actually could be worse than you think because dogs can’t eat everything that humans can. The following article will discuss foods that are healthy for your dog. We will also provide a list of dangerous foods for dogs and foods that are considered safe for dogs. 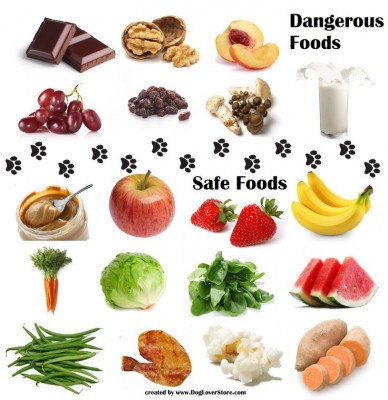 The food that is most commonly known among dog lovers as being dangerous for a dog is chocolate/cocoa. Humans love chocolate! But, why is chocolate bad for dogs? Not only does chocolate contain caffeine, it also contains theobromine. Both caffeine and theobromine are stimulants. For dogs, stimulants can fire up the cardiovascular and central nervous system, which could lead to increased blood pressure.

Nuts are a dangerous food for dogs to consume for many reasons. They are small and could become a choking hazard. Nuts are not easily digestible so they could cause digestive blockages and distress. They are high in fat, which isn’t good in large amounts or for tiny and non-active dogs. Lastly, they could contain a chemical such as juglone, which is toxic to dogs. Nuts also contain a high amount of phosphorous, which in dogs could lead to bladder stones.

Grapes and raisins can cause kidney failure in dogs. Research has not been able to clearly understand why grapes and raisins are dangerous to dogs but it is most likely due to mycotoxins. A mycotoxin is a toxic metabolite that is produced secondarily by different types of mold and fungi. Mycotoxins can also be found in certain wheat products. Wheat products are found in many dog foods. If your dog is sick often you may want to ask, is my dog sensitive to wheat? Bowel and intestinal issues can arise with wheat and mycotoxin sensitivities.

Fruits with Pits and Bones

Fruits that have pits, such as plums, peaches, and avocados, are dangerous foods for dogs because they are a choking hazard. They can also obstruct the digestive system. The pits also contain cyanide, which is a poisonous chemical. Peaches, without the pit, are generally a safe food for dogs. Avocados contain a fungicidal toxin called persin which is harmless to humans but deadly to dogs when consumed in large amounts. Speaking of choking hazards, have you ever fed your dog meat with bones? Cooked meats with bones, including fish, chicken, and beef can be dangerous. The bones can cause damage to your dog’s digestive tract as well as become a choking hazard. If you feed your dog a bone you want to make sure it is raw and large. Raw bones are moist and less likely to splinter causing intestinal damage. Large bones allow your dog to gnaw away and not swallow it whole.

Are wild mushrooms poisonous to dogs? Yes! Make sure to remove any wild growing mushrooms that your dog may have access to in your yard, park, trails or woods. Many of these mushrooms can be poisonous and deadly to dogs. If you don’t want to go crazy removing mushrooms, at least prevent your dog from eating them.

Both onions and garlic can cause anemia in your dog. In these two common cooking ingredients you will find sulfurs, such as allyl propyl disulfide and thiosulphate. These sulfurs can damage the red blood cells in your dog when consumed. All types of onions and garlic are considered a dangerous food for dogs. It doesn’t matter whether they are raw, dried, or cooked. Avoid feeding them to your dog.

Milk and dairy foods, such as cheese and ice cream, are not deadly but can cause digestive upset for some dogs. Not all dogs have enough lactase, which is an enzyme that helps break down lactose in milk. Ingestion could lead to diarrhea, uncomfortable gas pockets, and upset stomach.

Safe Foods for Dogs That are Healthy to Consume

(given that your dog does not have an allergy to these foods):

The items in the above list are all considered safe food for dogs. If you are unsure about whether an ingredient is safe or dangerous be sure to research before feeding it to your dog or contact your vet.

Other Articles Pertaining to Your Dog & Food

Can I Share Food with My Dog?
Can Dogs Eat Old/Expired Food?
Manuka Honey for Dogs

We offer over 212 dog figurines, coat styles, and colors. Not only do we have 212+ breeds, we offer custom painted dog figurines and angels. Upload your photo(s) on the product page and our artists will use the images to create your custom dog figurine. Check out our Dog Figurines

Kimberly earned her bachelor’s degree in operations management at the University of Massachusetts Dartmouth. When she isn’t drooling over adorable dogs on Instagram, she enjoys walking in nature, gardening in the sun, going to concerts, eating quality chocolate, going on drives, and traveling!