Every year we celebrate National Adopt a Shelter Pet Day on April 30th. This day is dedicated to raising awareness of the number of pets that are waiting in shelters to be adopted into loving families. Many times, shelter pets have stigmas attached to them. Some may think they are unworthy of love, they are “damaged” or they are troublesome. This is far from the truth. Many families who end up adopting from a shelter have found these pets to be overflowing with love. They are so grateful to be welcomed into a loving home because they know how harsh life can be coming from a shelter. 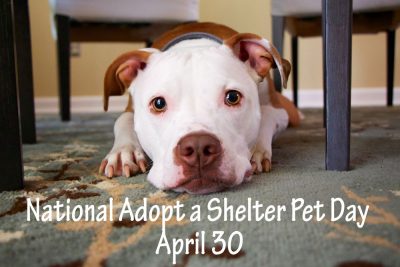 We’d like to offer you a few interesting facts if you are thinking about adopting a pet from a shelter:


If you are looking to bring a new pet into the family, consider adopting a pet in support of National Adopt a Shelter Pet Day.