The Miniature Pinscher vs Manchester Terrier is a common discussion among dog lovers. In the pictures below you can see the Miniature Pinscher (2A) and Manchester Terrier (2B) have undeniable similarities. As a result, they are often mistaken for being the same breed. But there are differences that set the two breeds apart from each other. Today we will discuss the similarities and differences between these two breeds to help you identify each breed. 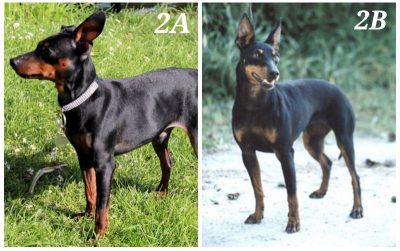 The toy and standard size Manchester Terriers are considered two interbreeding versions of the Manchester Terrier. The toy is up to 6” smaller than the standard size and approximately 14 pounds lighter. The only other difference besides their size is ear shape and cropping style. Cropping is a procedure where part of a dog’s ear is removed resulting in erect ears. In Europe, cropping is illegal but the AKC considers cropping “acceptable” because it preserves the characteristics of the breed. Against common misconception, the Miniature Pinscher is not a smaller version of the Doberman Pinscher. Sure, they have similar appearances but they are two separate dog breeds.

Can You Guess Which Breed is Which? 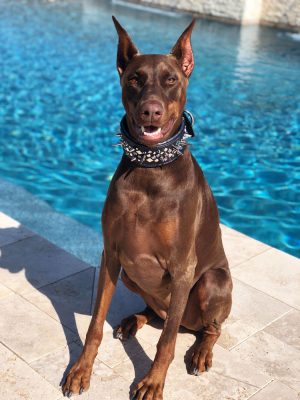 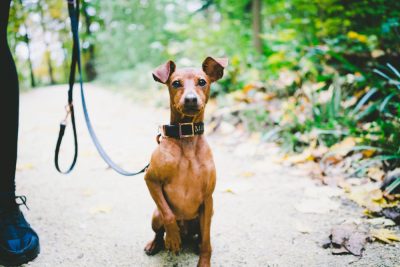 On the right you can see the larger Doberman Pinscher and on the right is the smaller Miniature Pinscher.

Both the Manchester Terrier and the Miniature Pinscher enjoy playing outside, but heavy exertion is not necessary. In other words, a quick round of play will do the trick as they don’t require a lot of exercise. Both breeds live around 14 years and do not have any major health concerns. Their smooth and glossy coats require little maintenance and have similar tan markings on their feet, face, and chest. The Miniature Pinscher has narrow ears, while the Manchester Terrier has round ears. They are petal shaped ears that come to a tip. Overly wide or curved ears are considered “faults” by the American Kennel Club. The toy Manchester naturally has erect ears. Cropped ears are considered a “fault” by the AKC. But the Miniature Pinscher’s ears are often cropped by their owners.

All in all these two breeds have many similar characteristics like lifespan, historical uses, and energy levels. But the differences in their country of origin, ears, tails, and size set them apart. Next time you see a Miniature Pinscher running in the park, stop for a second to consider if the dog is actually a Manchester Terrier. Now you’ll know the difference! 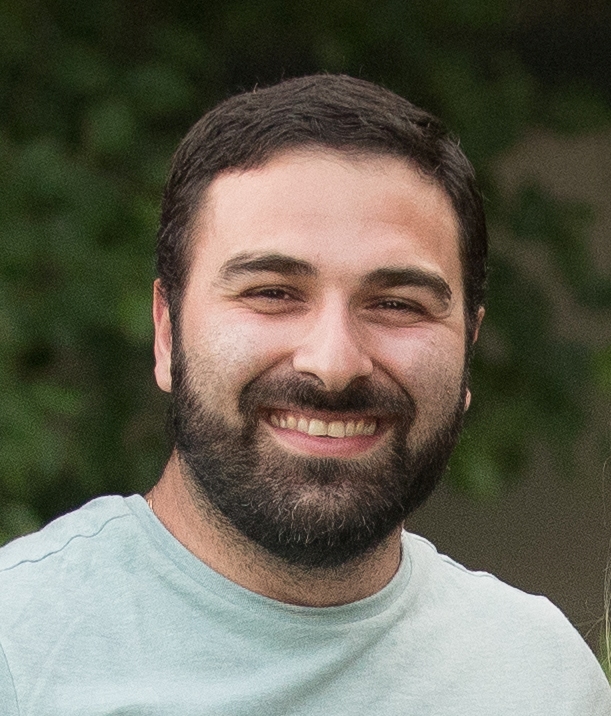