By now, we’re sure you are aware of the importance of honeybees on our food chain and the environment. Honeybees pollinate roughly one third of the food we consume. When honeybees pollinate they are essentially fertilizing our food and allowing over 90% of our wild flowers and plants to bloom. Some of these foods include blueberries, avocados, broccoli, and carrots, just to name a few. These are all “health” foods so their existence is important to the human population as they provide antioxidants, important vitamins, and more. Bees also produce honey, and who doesn’t love that sweet golden nectar? Farmers even “rent” bees and their hives during crop season to make sure their plants are being pollinated so they can flourish. 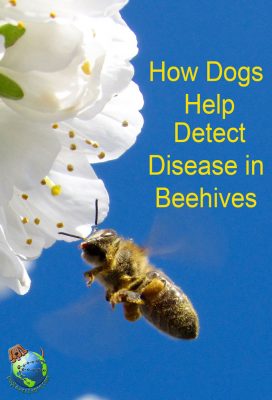 Unfortunately, hives and their colonies can suffer from the bee disease known as American foulbrood. American foulbrood, a spore-forming bacteria, gives off a nasty scent that some say smells like rotting meat. It’s important to be able to detect this scent so the bacteria can then be treated and eliminated before the all the bees die and abandon the hive.

So why are we talking about dogs and bees? How are they related? Well, one way apiarists, or beekeepers, have found a way to detect the scent of American foulbrood is by using the strong sense of smell that dogs have. Dogs can be trained to detect scents and once they are trained they can detect a smell in a fraction of the time that it would take a human.

Mack, a 3 year old Yellow Labrador, was adopted by an apiarist in Maryland. He was then trained for 8 months to detect the scent of American foulbrood. On his first day, he was able to sniff through 545 beehives in just under two hours. His owner, Cybil Preston, said that this task would normally take a human days or even weeks to complete.


Dogs are great for detecting scents because of their heightened sense of smell. Humans can detect the scent of American foulbrood but dogs have a high accuracy of detecting the putrid smell so the process goes much faster. If they don’t detect the scent right away they move on to the next hive without wasting time.
Cybil said that Mack is great at his job but when he is “off duty” he is a couch potato.