For years dogs have been used in warfare to attack, scout (What can dogs hear), search, and rescue. Dogs were used in ancient times as fighting dogs, in the early 1900’s as messenger dogs, and in present time as front-of-the-line war dogs. 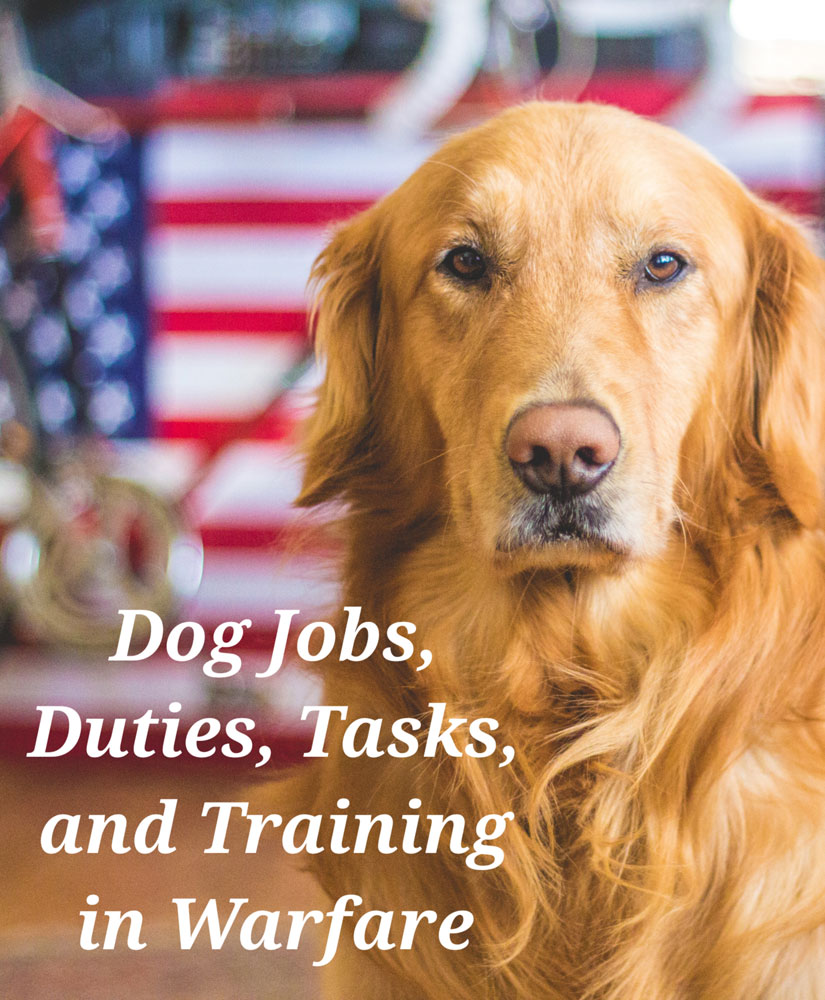 During ancient times, dogs were most often used as fighting or attack dogs. They were sent in to attack the enemy wearing spikes and armor fit for dogs.This type of canine warfare was eventually abandoned as the enemy’s weaponry advanced beyond the effectiveness of the dog’s attack. At one point, during World War II, there was a plan that was proposed to have Japanese soldiers train thousands of dogs and use them out in the field. Unfortunately, the dogs were not always easy to train and the soldiers did not always have the ability to train the dogs properly. Dogs have also been used for their strength as well as for communications. If heavy military equipment needed to be moved, soldiers would attach a cart to the dog and have them take the equipment to where it needed to be. Dogs have also been used as a delivery system. If a message needed to get from one location to the next, one “master” would send out the dog to find the other master in order to deliver the message.

In the early to mid 1900’s dogs were often used for medical research. If there was a new medicine out, dogs would be used to test the medicine instead of risking the lives of humans. Eventually, the ethics of this type of research was questioned, since dogs lives were being put at risk. In 1966 the Laboratory Animal Welfare Act was adopted, which regulates the treatment of animals in research, exhibition, transport and by dealers.

Even though dogs are known for being visually limited because of their color-blindness, they still have an exceptional ability to see, especially at night. Dogs are often used for scouting, whether it be land mines, traps, or enemies. Thanks to the dog’s keen sense of smell, detection and tracking, is under their list of skills as well. The dog’s part of the brain that is dedicated to scent is 40 times greater than a human’s. Whether it be scouting out a scent to lead their master to the enemy, warning their master of possible dangers, or sniffing out drugs and explosives, dogs have great detection. Once again, since dogs have great night vision, they were often, and are currently used as sentries, or watch dogs. Dogs are able to use their barking capability to warn their masters of possible intruders. Intimidation is another learned skill by dogs. Often used to intimidate prisoners for interrogation purposes, dogs will show aggression but be civil towards its trainer or master.

Currently, dogs have been going through training that many humans can not even imagine doing. Some dogs have been trained to jump 25,000 feet from an aircraft wearing an oxygen mask, while others prepare by wearing dog goggles, or “doggles”, to be hoisted up in to a helicopter for missions.

In May 2011, the United States Navy SEALs invaded past terrorist leader Osama bin Laden’s compound and they took a trained war dog in with them. The war dog was said to be either a German Shepherd or a Belgian Malinois, the only non-human military member that contributed to the success of the mission. Dogs were also used in the capture of Suddam Hussein.

Once dogs “retire” from their work in the military, they are often put up for adoption for a loving family to take them in as a pet. Military dogs may also be used as therapy dogs, which are dogs that are trained to provide affection and companionship to people in the hospital and nursing homes, or those with learning or physical disabilities.

When it comes down to it, no matter how you look at it, dogs are taken for granted. Whether they are used as a search and rescue dog, agility dog, working dog, companion dog, drug sniffing dog, watch dog, or any of the other hundreds of duties they have been given without a choice, dogs are not only man’s best friend, they are heroes.