Does your young child enjoy watching TV and have a love for dogs? If yes, we have the perfect list of fun children’s dog TV shows for you. There are many shows on television these days that are filled with silly dialogue or boring story lines. The dog themed shows that we have compiled are both entertaining and appropriate. While also having life lessons built into the story lines that help your child grow. Many shows come and go, so if you find a show that is no longer playing on a channel in your area, DVDs of the shows are often available online, in stores, or through internet stream subscription services where you can enjoy movies and shows.

So let’s get started! Remember that good old show with the big red dog? Yes, we know you do. And what’s that dog’s name? Hm… I’ll give you time to think about it. Can’t remember? It’s Clifford! Although it’s an uncommon name, many grew up loving and watching this show. Clifford the big red dog books were first published in 1963 and new stories are still being published. In 1988 Clifford got his first appearance on the small screen when “Clifford’s Fun with…” video tapes were released. Soon after, a sing along tape was released and from 2000 to 2003 Clifford the Big Red Dog was aired on PBS Kids. Shortly thereafter, in 2004, Clifford Puppy Days was aired on PBS Kids.

Here’s a quick rundown of the story of Clifford. Emily Elizabeth, a young girl who lived in the city, got Clifford as a birthday gift. Clifford was so small that no one thought he would grow to be full size. But soon enough, Clifford grew to be 25 feet and Emily and her family were forced to move to an island where Clifford could have plenty of space. Some say Clifford is based on a Bloodhound, while others say Clifford is based on a Vizsla. Stories follow him through rescues, storms, Christmas, Halloween, school, and much more.

Clifford was finally featured on the big screen in 2004, in the movie titled “Clifford’s Really Big Movie”. Clifford shows are available on the internet. Most books and TV shows are listed as appropriate for ages 3 and up but this show offers plenty of feel-good story lines for younger children as well as the young at heart.

Kipper the Dog is another great show with story lines based for pre-school to kindergarten aged children. There are 30-40 children books written for the Kipper the Dog story line. In 1997, similar to Clifford, Kipper’s stories were turned into a TV series. Episodes ran from 1997 until 2001. In 2010 Kipper: Space Invaders was released on the big screen and in January 2011 Kipper 2 was released. Stories follow him through many adventures which include butterflies, rollerblades, flying machines, a fair and golfing.

Kipper, a Beagle, is a friendly and adventurous dog who has a Scottish Terrier/Miniature Schnauzer and a Pig as his best friends. The entire cast has English accents, and the shows consist of short 8 minute story lines. Jake, an Old English sheepdog, is featured on the animated series as a dog friend that lives in Kipper. Holly, a girl Dalmatian, is featured in the Kipper books but not in the TV series.

(If you are enjoying this article, check out our Dog Cartoon Character Crossword Puzzle.)

This show is calm on the eyes with its simple illustrations and light colors. But the stories will hold your child’s attention with its jazzy music and stories based on the creative and brave characters. Kipper originally aired on ITV and was then aired on Nick Jr. and PBS Kids Sprout. Episodes of Kipper the Dog are also currently available on the internet.

It’s mail time!!! Do you know the next line? If yes, you probably know what show is up next … Blue’s Clues! And the song goes … ”Here’s the mail, it never fails, it makes me want to wag my tail, when it comes I want to wail … mail!” Blue is a blue spotted dog. The breed of the dog is unknown and is open to the imagination. Blue’s Clues was originally aired on Nick Jr. in September of 1996. By the time the show ended in 2006 it aired in over 60 countries. This show aimed at preschool-aged children, but many children ended up liking this show into their early elementary school years.

This unique show had the host of the show (Steve, and later Joe) speak to the children through the camera, which made the children feel as though they were being heard and were a part of the show. Each episode would air on Nick Jr. for 5 days straight, before another episode would air. This was an idea thought out by the producer’s of Blue’s Clues because they believed repetition was a true asset in a child learning. 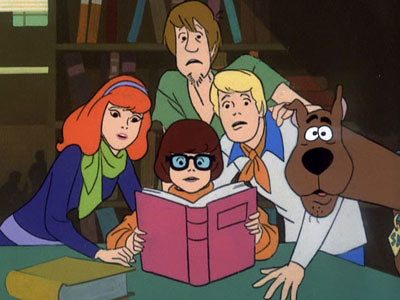 Other honorable mentions are Wishbone and Scooby-Doo. Wishbone originally aired on PBS in October of 1995 until 1998. Reruns of the original shows began in 1998 and lasted until 2001. Wishbone followed the story of a Jack Russell Terrier. He had big dreams and a farfetched imagination which allowed him to act out characters from literature throughout history. For example, Robin Hood. Some PBS channels continue to play episodes of Wishbone and in 2011 a DVD movie was released entitled “Wishbone: The Little Dog with a Big Imagination.” Wishbone story lines offer feel-good family-friendly entertainment. Wishbone episodes are currently available to view online if your local PBS station doesn’t rerun episodes.

Scooby-Doo is another classic television series, which follows a gang of supernatural-mystery-solving friends and their loyal Great Dane, Scooby-Doo. The show originally aired on CBS in 1969. However, it moved from ABC to the WB to The CW and now airs on The Cartoon Network where new shows are still currently aired. Original episodes are available to view on the internet and several of the direct-to-DVD movies and Scooby-Doo spinoffs are available on DVD as well. Scooby-Doo even made it to the big screen in 2002 and again in 2004 with Scooby-Doo 2. Children of all ages gravitate towards Scooby-Doo because the goblin and ghost-filled story lines are full of mystery and adventure but the creatures maintain a humorous, less spooky nature.