The color of your dog’s gums is a vital sign of your dog’s health. You’ll notice the Veterinarian lifting your dog’s upper lip to check their gums at their regularly scheduled checkups. Dog gums should always be a light colored pink. Colors other than pink could mean a variety of medical issues may be present. Some dogs naturally have darker, more red, or tinted colored gums, which may be considered absolutely “normal”. If you find your dog’s gums suddenly change color then there may be a cause for concern. If anything ever seems out of the ordinary or you say: “my dog’s gums are red/black” it’s a good idea to consult a veterinarian. 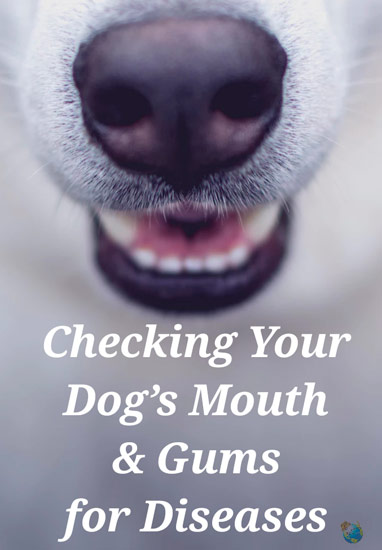 You can test your dog’s circulation and hydration by performing the capillary refill test. Take your thumb and gently press down onto your dog’s gums then release. Under your thumb, your dog’s gums should turn white. Once you release the pressure of your thumb the gums should return to their normal light pink color within a second or two. If your dog’s gums do not return to their normal color within a short period, then he or she could be dehydrated and/or have lack of blood flow. Make sure your dog has plenty of water to drink. If you think hydration isn’t the main cause for concern then seek medical attention.

If your dog’s gums look white before you perform the capillary refill test, your dog may be severely dehydrated. They may be experiencing loss of blood as well. Blood loss can happen externally, which will be apparent, but it can also happen internally. In this case, medical attention must be sought immediately. If your dog loses too much blood, he or she may start to experience organ damage and/or failure.

White gums in dogs can also indicate anemia, a condition when the blood supply does not have enough healthy red blood cells and/or an iron deficiency. An infection may also be present, which has a variety of causes including ticks.

If you examine your dog’s gums and they appear blue, they may be experiencing a lack of oxygen, which could be due to a number of issues. Your dog may have an infectious disease, a tumor, toxicity, parasites, an immune disorder, an allergic reaction, heart disease, a foreign object obstructing their passage way, or may have experienced some sort of trauma to the gums. Whatever the cause, it requires medical attention. The Vet should be able to pinpoint the cause if you are not already aware of a health problem your dog may have.

Purple or gray gums in dogs could indicate some sort of trauma, i.e. your dog has new teeth coming in. It could also indicate poisoning from food/chemical products or shock. There are several bodily functions that take place when a dog goes into shock. Shock typically occurs after a major injury that may be traumatic or cause a great deal of blood loss. The body becomes “scared” which creates an increase in heart rate, blood pressure, and constrict blood vessels to prevent blood loss. If your dog is in shock you may notice rapid breathing, shallow but rapid heartbeat, or their skin may feel cold to the touch because of decreased blood flow. If you find your dog in shock, immediately try to stop the bleeding if there is an open wound. Make sure your dog has a clear passage way to breath, and elevate your dog’s hind legs to increase blood flow to the heart and brain.

My dog’s gums are red, why? Red gums in dogs may be a sign of an infection or irritation. Pink colored dog gums often have a red look but don’t be alarmed. When you see red gums, you’ll be able to tell if they are too red. Generally red gums look puffy or inflamed. Red inflamed gums can be caused from a topical irritation, such as a new toy, or dental concerns such as gingivitis, which is similar to humans. If your dog has too much dental plaque it can cause a buildup of bacteria which then turns into gingivitis. Gingivitis is inflammation of the gums which can lead to bleeding, sensitivity, and red gums in your dog. If your dog’s gums are red it can be an indication of an infection or poisoning. This can be from an exposure to toxins or consumption of a foreign object.

My dog’s gums are black, why? Blue or black gums in dogs can be common depending on the breed. Like the Chow Chow or black pigmented dog gums, like the German Shepherd. Be sure to baseline what is “normal” for your dog. This allows you to determine if your dog’s gums appear to be an abnormal color. If you think your dog may be sick and are unable to look at the color of his or her gums, try checking other similar parts of their body like underneath their eyelids. We cannot stress it enough, if you notice anything abnormal with your dog or question the color of their gums, your priority should be contacting your local Veterinarian.