Have you heard the news?! California has passed a piece of legislation, A.B. 485, that will most likely set the path for all states to follow. On Monday, October 16 2017, it was announced that California will require all “pet stores” to exclusively sell rescued dogs from nonprofit groups. This also applies to cats and rabbits. This means that nonprofit rescue groups must be the exclusive supplier for pet store dogs, cats, and rabbits. Pet stores have typically been known to get their supply of pets from breeders. This has become a controversial topic for many reasons. Here’s a few: 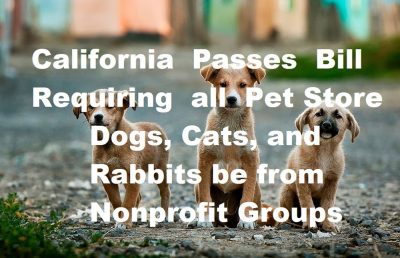 If the pet store does not abide by this new rule they will be fined $500. Buyers of course are still able to buy puppies and dogs from private sellers or breeders but all pet stores must source their dogs from rescue groups and shelters. We hope this bill will begin to decrease the number of shelter pets waiting to be adopted into loving homes. Better yet, we hope this bill starts a movement and the rest of the states follow in their footsteps.